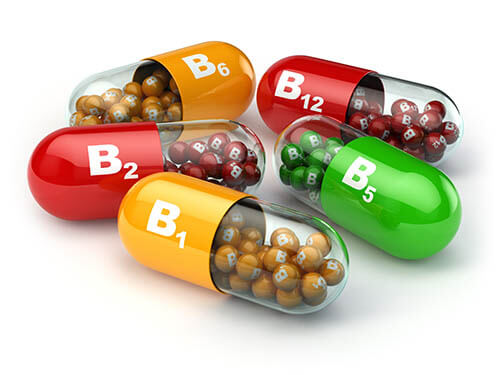 Vitamin B and Increasing Testosterone

B vitamins are crucial to your health and testosterone but due to modern soil degradation, sanitary practices, cooking techniques, poor diets and higher levels of stress in everyday life, American’s are beginning to fall short of some of their daily needs in epidemic proportions.

Vitamin B is water-soluble, which means your body cannot store excess vitamin B for a rainy day. Even if you are a health nut, slacking on your diet for just one day could put you in a state of need your body struggles to recover from.

I recommend supplementing with B3, B6 and B12 to maximize your testosterone production.

If you want the science behind my rationale, read on!

Vitamin B1 (Thiamine) and Testosterone

Crucial to the neurological system, insufficient B1 may cause long term cognitive damage. In the short term, it can have grave impacts on nerve damage, fatigue, irritability, muscle weakness, focus and short term memory impairment.

Because vitamin B1 may affect muscle mass, it can also play a role in testosterone.

Vitamin B1 in the Diet

Thankfully, B1 is in a multitude of foods and it is believed most people in developed Western countries get ample thiamine in their daily diet, even if that diet is not great.

If you have an exceedingly poor diet, you may want to considering supplementing B1, however, it is not a concern for your average joe, so is unlikely to have an immediate impact on your testosterone levels.

B1 Good Sources of Food

Nuts, seeds, beans, nutritional yeast, asparagus, most whole grains and enriched grain products such as cereal or bread, and in some organ meats such as the liver.

Vitamin B2 (Riboflavin) and Testosterone

Vitamin B2 is an antioxidant, skin protectant, can boost energy, facilitate a healthy metabolism and much more (1).

Every single cell within your body requires vitamin B2 and other B vitamins cannot perform their roles unless an ample amount of B2 is in the body.

As far as testosterone goes, it should come as no surprise B2 is a key player. One of the most crucial roles is its ability to inhibit testosterone 5 alpha-reductase (2).

5 alpha-reductase is an enzyme which converts testosterone into DHT in the testacles and prostate. DHT is crucial for some functions in the male body but too much of it may result in various health issues later in life such as benign prostatic hyperplasia.

Vitamin B2 in the Diet

Deficiency in B2 is rare in the West in large part because it’s fortified in most refined grain products as well as an ample supply in eggs and meat.

Like vitamin B1, supplementing with B2 isn’t a bad idea to make sure you are never deficient but it’s really quite difficult to be deficient in riboflavin if you consume enough calories each day. That means that vitamin B2 supplementation is unlikely to have a major impact on your testosterone levels..

B2 Good Sources of Food

Vitamin B3 (Niacin) and Testosterone

A stimulator of growth hormone, B3 is crucial to gaining muscle mass and losing fat. It is also a key factor in raising HDL which is your good cholesterol while at the same time helping to lower triglycerides or LDL which is bad cholesterol (3).

Cholesterol is a base of what forms testosterone so it doesn’t take much to see the need for vitamin B3 and amplifying your testosterone.

Since the body’s ability to convert fats, proteins and carbs into energy also require niacin, it can have a pretty drastic impact on muscle building and fat loss as well.

Vitamin B3 in the Diet

Major deficiency is B3 is rare in a typical Western diet.

Because it is so crucial is so many areas of “being a man” and you have to have a fresh supply of it everyday as the body cannot store “leftover”, I recommend you do take a B3 supplement, since one off day can have a pretty drastic impact on your testosterone.

B3 Good Sources of Food

Vitamin B5 (Pantothenic Acid) and Testosterone

Vitamin B5 helps to produce cholesterol and as we just pointed out, cholesterol is crucial for your body to make testosterone as well as potentially helping to decrease the risk of heart attack (4).

It also plays a key role in firing the neurotransmitters in your brain which carry chemical signals through your body and keep all of your systems functioning properly.

Vitamin B5 is also critical in the manufacture of red blood cells which carry oxygen throughout the body. Increased oxygen uptake can of course help with all performance based training whether it be endurance or strength focused.

Vitamin B5 in the Diet

B5 is in almost all foods so it’s extremely rare to find a case of deficiency if you are eating at all.

As just mentioned it’s hard not to get enough pantothenic acid in your diet, even a very poor one. I see no reason for most people to take a B5 supplement to support testosterone levels unless specifically recommended by your doctor.

B5 Good Sources of Food

B5 is really in just about everything you eat but mushrooms, avocados and sweet potatoes top the list.

Vitamin B6 (Pyridoxine) and Testosterone

Just as important to note, deficiency in B6 can result in several severe breakdowns within the body ranging from nerve damage to kidney stones, lung cancer and of course insufficient testosterone levels.

B6 has a double impact on testosterone affecting it both directly and indirectly.

Sufficient levels of vitamin B6 helps increase testosterone levels by promoting androgens. On the flip side, a deficiency can be detrimental to testosterone as the body is unable to properly metabolize estrogen. This can lead to what is often called “estrogen dominance” within the body.

High prolactin levels have also been known to cause “bitch tits” which I’m pretty sure isn’t a “turn on” for your lady friends.

Vitamin B6 in the Diet

Standard medical advice for years said deficiency was rare, but more and more studies are begining to showcase mild deficiency is actually becoming a rampant problem (6).

It doesn’t help that the older you get, the more B6 your body actually requires, which only makes the likelihood of you being deficient more of a probability.

You absolutely must supplement with vitamin B6 if you want to ensure you are maximizing your testosterone levels.

B6 Good Sources of Food

Vitamin B7 (Biotin) and Testosterone

In studies on rats, it’s been shown that B7 plays a significant role in testicular function (7). Of course it would be too dangerous to try and make a human purposely deficient in B7 and rats and humans are not exactly the same.

However, considering how important all B vitamins are to maximize testosterone levels there isn’t a reason to doubt it also has a significant impact on humans as well.

A deficiency in Biotin also appears to lower glucose utilization (8) in the body, which increases the risk for obesity. Having too much body fat has a grave impact on strong testosterone levels.

Vitamin B7 in the Diet

Daily requirements for B7 are small and it’s in a large variety of foods so deficiency is very rare.

Because Biotin is readily available in common foods, supplementation specifically of this B Vitamin is not normally needed for healthy testosterone levels.

B7 Good Sources of Food

Vitamin B9 (Folate) and Testosterone

One of the most important prenatal vitamins because of it’s key role in supporting nerve and immune functions as well as synthesizing DNA and helping to prevent birth defects.

Unlike the other B vitamins, there doesn’t appear to be much of a direct link between folate and testosterone.

However, one could certainly argue the importance of immune functions and so forth in the grand scheme of overall health and keeping testosterone levels elevated.

Folate, like most other B vitamins has such a huge overall affect on your health, it would be silly to suggest being a little deficient in it, even just once in awhile, won’t affect your testosterone.

Vitamin B9 in the Diet

B9 is found mostly in plant foods so if your diet is lacking in vegetables (especially leafy greens), fruits and beans, you may run the risk of deficiency.

Pregnant and nursing women as well as diabetics run a higher risk of being B9 deficient.

Most men are not at risk of suffering from vitamin B9 deficiency so for the purposes of increasing testosterone levels this does not make or list in needed supplementation.

In addition to that, supplementing with B9 may be dangerous to your health.

I would like to note for those men reading this who may be diabetic or have a baby on the way, how important getting your folate is.

I would also like to note the difference between “folate” which is naturally occurring B9 found in foods and “Folic Acid” which is a synthetic B vitamin found in supplements, fortified foods and has been linked to cancer (9).

Folate (b9 in its natural form) is much more easily absorbed by the body so if you are concerned with deficiency, you should increase your intake of foods high in B9 such as spinach unless otherwise directed by a healthcare professional.

B9 Good Sources of Food

Vitamin B12 (Cobalamin) and Testosterone

The amount of b12 needed each day to survive is rather microscopic, however the ramifications of deficiency is horrendous.

Unlike other B vitamins, b12 can be stored in the liver which is good. However, that also means deficiency can creep up on you.

It’s been reported that health problems, which range from testicular function and cognitive decline to lethargy and megaloblastic anemia, may not begin to show symptoms until 5 or 6 years down the road.

But I thought only vegans and vegetarians were at risk of deficiency?

Even a mild deficiency may accelerate cognitive decline (11) and who knows what other side effects could be lurking in the shadows that just haven’t manifested yet or were not linked directly to a “low normal” b12 count..

Vitamin B12 in the Diet

As mentioned, daily requirements for cobalamin are small but it’s not the easiest vitamin to get either.

In foods, it is found only in meats but thanks to a lack of organ meat in the typical western diet, as well as modern sanitary practices and soil degradation, even meat eaters can be deficient.

I highly recommend supplementing with vitamin b12 as the overall health ramifications are too big, and deficiency may have a huge impact on your ability to maximize your testosterone levels.

There are two types of B12:

Cyanocobalamin is a chemically synthesized form and is cheaper to manufacture so it is the most common type added to supplements.

However, the body does not absorb it very well and it also contains a cyanide molecule the body has to remove and discard.

Methylcobalamin on the other hand, is the most bioavailable form of b12, meaning it is the most well absorbed. It is also the form needed for your nervous system to function properly! (13)

Make sure you B12 supplement says it is from Methylcobalamin.

B12 Good Sources of Food

Force X7 by Alpha Wolf Nutrition is the only multi-ingredient, natural testosterone booster we recommend and includes B3, B6 and B12 in its formulation.