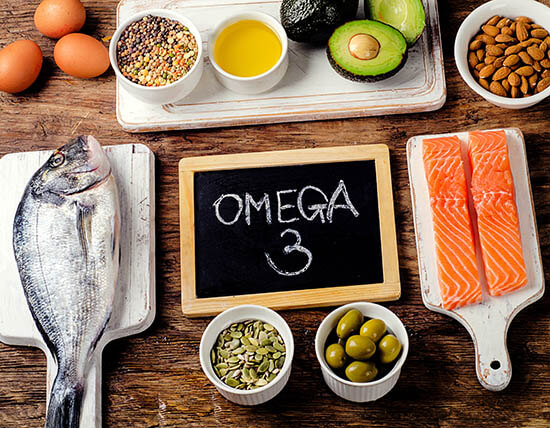 There is a plethora of health benefits associated with omega 3 fatty acid intake, most of which I imagine you have heard about since it seems to be in the news every other day.

Omega 3 fatty acids have become very commercialized and whenever that happens the hype train starts to run full steam ahead.

For example, if you eat eggs frequently, you’ve probably noticed several brands advertising their high omega 3 content. One of the ways this is accomplished is by mixing chia seeds and/or flax seed into the chicken feed.

It has also become more common to mix nuts and seeds into bread so the maker can boast of a high omega 3 content.

Before you get too excited over consuming omega 3 though and start thinking it’s going to be this magical boost in testosterone, I need to be clear, it does not work that way.

There is not a single study I could find on human males which showed a direct correlation between increased omega 3 consumption and increased testosterone.

However, omega 3 intake is a long term play because it does positively affect many areas of your life. Some of these benefits include but is not limited to, reducing body inflammation, lowering blood pressure, improving heart health, strengthening the cholesterol profile and so much more.

These are all extremely important factors in maximizing your testosterone levels so just because there may not be an immediate jump in testosterone due to omega 3 intake, doesn’t mean it’s not imperative to long term testosterone health.

It should be noted there are 2 types of omega 3 fatty acids, ALA (plant sources) and DHA (marine sources).

For a long time it was said that DHA was much healthier and while the body could convert some ALA into DHA, it was not very effective at it.

Without getting too intombed in all of the science as I could drag out this topic for a few days; the line of thought in some circles that ALA isn’t actually all that great for you and you need to focus heavily on DHA is mostly rubbish and science is slowly coming around to that point.

I could easily write a 5,000 word blog on ALA and DHA and that would barely even scratch the surface but that is out of the scope of both this article and this website. If you want to learn more about ALA (Alpha Lipoic Acid) though, this is a good place to start. (1)

Is Fish Oil (DHA) a Better Source of Omega 3?

The short answer is, no, it is not. Especially not in supplement form.

Supplementing with fish oil has actually been shown in scientific study after study to have little to no positive effect. (2, 3, 4, 5)

In fact, some studies have actually shown negative effects of fish oil supplementation like this one (study) showing an increase in inflammation. (6)

Fish oil is a processed form of omega 3, high in processed polyunsaturated fatty acids (PUFA). As it turns out fish oil is “susceptible to lipid peroxidation due to their high degree of unsaturation” which in plain english means it goes rancid easily and then becomes a negative source for your body. (7)

In addition to never being 100% sure if your fish oil has already become rancid before you even started consuming it you have to worry about contamination from substances like mercury in our over polluted waters.

Not my brand of fish oil, you say! Mine is distilled at a molecular level and blah blah certified to be pure and wonderful.

That’s great but as Dwayne “The Rock” Johnson might say “IT DOESN’T MATTER IF YOUR FISH OIL IS MOLECULARLY DISTILLED!”

Of course I have no idea if The Rock actually likes fish oil or not but if you think he does, maybe you should send him to this website to get his learn on! haha

Even worse is “the less volatile organic compounds, such as polybrominated diphenyl ethers and brominated HNPs, were detected at similar levels” in all 3 oils, which used a commercial molecular distillation treatment. (8)

In other words, molecular distillation treatment doesn’t necessarily mean you are getting clean fish oil.

According to Dr. Axe, upwards of  90 percent of fish oils sold today may contain mercury, pesticide residues and/or hydrogenated oils. (9)

And of course, even if you are getting clean fish oil, it may still be rancid and you would have no way of knowing it.

Omega 3 Fatty Acids Should Come From Your Diet

If you have read any of my other articles you have probably noticed a trend and that is I tend to recommend whole foods over “key” extract nutrients. Example: Turmeric rather than curcumin; extra virgin olive oil rather than oleuropein.

Too often in Western thought and medicine we try to dissect things down too far and in doing so we end up pulling out this great nutrient from its natural environment and potentially ruining it.

Sometimes nutrients work so great because they are a part of a bigger picture. Babe Ruth might have been the most important player on the Yankees but he didn’t win games all by himself.

When it comes to Omega 3’s this is no exception. Focus on correcting imbalances in your diet rather than trying to fill it in with oil supplements.

How Much Omega 3 Should You Take

There isn’t really a specific amount of omega 3’s we should be consuming each day, rather it’s about the ratio of omega 3 we consume vs omega 6.

In today’s world of processed foods, fast food, soil degradation, etc… it’s not uncommon for people to get an omega 6 to 3 ratio of around 25:1 respectively.

Our caveman ancestors diet would have been closer to a 1:1 ratio and modern science tells us we should shoot for at least 4:1 with some experts still saying we should be as close to 1:1 as possible.

Foods High In Omega 3 You Should Eat More Of

What’s most important when it comes to omega 3’s is that you focus your diet and on both getting your omega 3’s from real food sources rather than supplements as well as keeping foods extremely high in omega 6’s to a minimum.

Foods you should eat more of which have a strong omega 6 to 3 ratio include:

*Organs and marrow are much healthier alternatives than meat and also far more “paleo” if that is your thing. Large quantities of muscle are not and have never been “paleo”. But if you are going to consume meat try to get pastured and/or grass fed. Also learn the laws in your state as in some places a cow can be grain fed all but the last 3 months of their life and still be sold as “100% grass fed”.

Foods High in Omega 6 You Should Eat Less Of

Eat less of these foods with terrible omega 6 to 3 ratios:

*It’s hard to know exactly what kind of egg you are getting unless you know the farm it came from. Because of the way laws are written a cage free chicken may never see sunlight or eat a single bug and a “free range” chicken may not either!

If you want to learn more about what “free range” may actually look like you can read more here at UPC Online. (10)

Fair warning, there are graphic images and this is a website promoting a vegan diet and lifestyle. While I myself eat a mostly whole foods, plant based diet I am not a vegan and do occasionally eat meat including chicken and eggs. However the information presented on that particular page I believe to be accurate and if you are concerned about your health you should be concerned about where your food comes from.

I assume if you care enough to spend the extra money to buy “cage free” you want to know whether or not you are actually getting what you are paying for.

Force X7 by Alpha Wolf Nutrition is the only multi-ingredient, natural T booster I recommend.