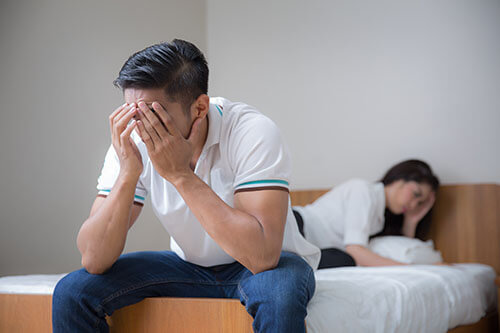 For instance, the natural decline in testosterone and thus libido that comes with middle age.

As men age, our bodies naturally produce less testosterone, which in turn affects our sex drive.

Perhaps even worse, when we do get around to doing the deed, many middle-aged men find that their erections simply aren’t what they used to be. Gone are the days when your sex partners had to worry about “chipping a tooth on that.”

But while declining testosterone levels are perfectly natural, there are natural ways to combat it. Indeed, the science surrounding the phenomenon has never been more advanced.

You can’t go back to being 20 again, but there is absolutely no reason you have to accept a declining libido and sub-par erections, no matter what age you are. Here are a few ways to get back that “loving feeling.”

This starchy South American tuber is all the rage these days, and for good reason. Animal studies have shown that it works as an aphrodisiac, and in humans it has been found to increase semen quality and quantity, as well as supporting prostate health.

It has long been a staple of Andean cultures, prized for its ability to help boost sex drive with generous helpings of iron, selenium, magnesium, and calcium, all vital for a healthy libido.

Did we mention magnesium? There are numerous studies out there showing that a simple magnesium supplement can increase testosterone production in men. Along with that you can count on an increased sex drive and erection strength.

But don’t take our word for it – here’s a National Institutes of Health (NIH) study that shows magnesium supplements boost testosterone in both active and sedentary men.

Ah, good old ginseng – is there nothing you can’t do? Long gone are the days when ginseng was thought of as just that weird orangey stuff that comes with your sushi.

Apart from heating up your taste buds, cayenne pepper has been shown to help in heating up things in the bedroom as well.

It acts as a vasodilator, allowing more blood to flow to the areas where you need it most, as well as enhancing the production of the precursors needed for that crucial nitric oxide you need for a healthy, powerful erection.

If you’re a middle-aged man and you don’t supplement with zinc, you’re way late to the party.

Zinc has long been known to increase semen quality and quantity, as well as boosting sex drive in general. It also has been shown to increase erection strength and duration, according to this NIH study and countless others.

Also known as Indian ginseng, Ashwagandha has been known for millennia as a natural way to improve libido in both men and women.

It even shows up in the fabled Kama Sutra! It has been shown to improve a sense of well-being, reduce inflammation, and lower blood pressure, as well as lighting a fire in the bedroom department.

This amino acid is naturally occurring in watermelon and works by converting into arginine when consumed. And arginine increases the levels of nitric oxide in the body, crucial for widening blood vessels and increasing blood flow, leading to longer, stronger erections.

Pomegranate is not only another great source of L-citrulline, it’s also high in vitamin C, which enhances production of nitric oxide and thus that critical blood flow necessary for reliable erections.

It’s also great for sexual health in other ways, having been shown to reduce cancer growth in the prostate, as well as reducing blood pressure.

While the name longjack sounds like the punchline to a particularly juvenile joke, it turns out that this Indonesian herb is great for restoring lost sex drive.

Also known as Eurycoma Longifolia Jack or Pasak Bumi, longjack has been shown to increase free testosterone – crucial for libido and erection strength – as well as helping to build muscle mass and increase energy and a general sense of well-being.

Having longer, harder, and more spontaneous erections won’t hurt your sense of well-being either!

Hey, we can’t stop aging, but science and research is working overtime to show us how we can avoid some of the worst effects of it.

With all we know about how to naturally increase your libido and erection strength, you’d be foolish not to take advantage of it by supplementing with some or all of the substances listed here.

I would say “good luck,” but you won’t need luck if you’re taking these supplements!

Want to boost your testosterone and libido?

Use coupon code “itestosterone” for 10% off your purchase! Read our full Force X7 review here.

How Stress Affects the Immune System and Effective Coping Strategies