DHT is a natural hormone scientifically known as dihydrotestosterone. In men, it is necessary for an energetic, athletic body and a vital component of a healthy hormone profile.

The primary form of DHT production comes from the enzyme 5-alpha-reductase (5-AR) which forms DHT from testosterone within the testicles and prostate gland of men. There may actually be other pathways which the body produces dihydrotestosterone in humans however the science is still out on that. (1)

There are a lot of crucial health benefits to having robust DHT levels but thanks to pharmaceutical companies pushing their DHT blocking drugs as a way to prevent and or stop hair loss and problems with the prostate (BPH) it has gotten a bad rap.

In this article we are going to take an in-depth look at why healthy DHT levels are important for you as a man and what some of the unfortunate misconceptions are about it.

It is important to note that both the enzyme 5-alpha-reductase and DHT itself are not well understood at this point in time.

There are many conflicting studies and much of the research which is well understood has been performed on animals and cannot be duplicated on humans as we can obviously not dissect a human as scientist will do to a rat.

I will do my best within this article to take a holistic approach to dihydrotestosterone. That is, I am neither trying to demonize it nor promote it but rather look at it from the perspective that is naturally occurs within a man’s body and what positive roles it plays.

Because modern pharmaceutical companies have successfully demonized it in many ways, it may seem at times as if I am promoting DHT by means of discarding (through science) some of what has been negatively associated to it.

However, in the end I am merely suggesting you do not actively seek to block your body’s own natural DHT conversion unless directly asked to do so by your personal health care provider.

In fact, any DHT that is formed within your muscles or finds its way into your muscles is quickly deactivated by an enzyme known as 3 alpha-hydroxysteroid reductase (3a-HSD).

So how is it possible for dihydrotestosterone to be such a powerful muscle and strength builder? This is where things get interesting!

If you have spent any time in the gym talking to fellow weight lifters or read any bodybuilding forums or magazines, you know that estrogen is an enemy of maximizing both your testosterone as well as physique and performance.

Contrary to popular misconception, estrogen does play an important role in your overall health and the goal should not be to bring your estrogen level to absolute zero. This is just one reason I do not recommend taking synthetic drugs to block estrogen unless prescribed for health reasons, by a doctor.

In fact, I suggest you do not even take DIM supplements to block estrogen which has become one of the more popular “natural” estrogen blockers you can buy over the counter.

With that said, you do want to keep your estrogen levels on the lower end of the “healthy spectrum”.

If you are doing things to naturally increase your testosterone such as lifting weights, doing sprints, etc… you are most likely increasing your estrogen as well since at a very basic level they go hand in hand.

In addition to that, common everyday items for many people such as processed foods, dairy and chemicals in everything from cleaning supplies to health care products such as shampoos, deodorants and toothpaste may increase estrogen productions as well. (4)

DHT, however, is a natural and powerful estrogen blocker! (5)

There are 2 primary ways it works to control estrogen levels.

This is extremely important to note because if you are actively trying to block your body’s production of DHT you are also actively killing one of your bodies most powerful anti-estrogen fighters.

DHT Is Crucial to Sexual Performance

Dihydrotestosterone is critical to sexual function, libido, and your mood. Multiple studies now have shown that men taking the a DHT blocker may experience diminished sex drive, erectile dysfunction (ED), prolonged time to ejaculation, experience more depression and may be put at an increased risk for prostate cancer! (6, 7, 8, 9)

If you want a thick, manly beard; DHT is also crucial for that as testosterone primes the follicles but it appears to be dihydrotestosterone which promotes linear growth!

You can read more about this process over at BeardResource.com

Does DHT Cause Hair Loss? 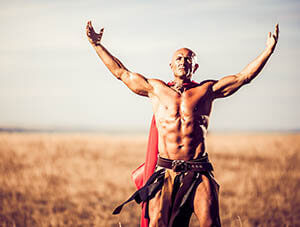 DHT tends to get a bad wrap because it’s been associated with hair loss.

However, the science doesn’t actually draw a firm conclusion to this.

While DHT does likely play a role in hair loss, there is a whole host of factors which go into it and exactly what role DHT plays is not clear.

The once widely advertised hair loss wonder drug Propecia, a 5α-Reductase inhibitor (DHT blocker) has been shown to halt hair loss and even regrow hair in some cases.

However, as we have discussed, DHT is very crucial to several areas of your health and men taking Propecia may experience a decreased sex drive, an increase in breast size (develop “bitch tits”), and experience erectile dysfunction, according to Merck Manuals.

With that said, it does not appear that DHT in and of itself causes hair loss. In fact, more modern research says that elevated estrogen levels in men causing a hormone imbalance may be the biggest culprit behind hair loss. (10)

There is also some research suggesting that higher levels of free testosterone plays more of a role in male baldness.

Of course free testosterone is your best friend when it comes to strength and muscle gains as well as sexual performance so that’s probably the last thing you want to try and decrease.

In the end, MPB (male pattern baldness) comes down mostly to genetics. Some men’s hair follicles are simply more susceptible to falling out then others. While having a healthy overall hormone profile may help you keep your hair a little bit longer, there is simply no way to prevent it altogether.

If you are bald and beautiful like I am, take solace in the fact that researchers have found bald men are perceived to be more dominant, a full inch taller, 13% stronger, more confident, more masculine and have better leadership, than men with hair! (11)

Does DHT Cause Prostate Issues (BPH)?

There has been a lot of bad publicity about DHT and prostate issues but once again, the real science behind prostate problems says something completely different than the stories the media and big pharma has been feeding us.

As already mentioned above, using DHT blocking drugs may be linked to an increased risk in developing prostate cancer. (7, 12)

Is estrogen and hormone imbalance the real cause of prostate cancer?

In a recent study it was also found that an increased level of one particular estrogen, metabolite 4-OHE1, may play a significant role in whether or not you develop prostate cancer. (13)

Another study on 144 men showed absolutely NO INCREASE in BPH when given a dihydrotestosterone (DHT) gel. (14)

For years, prescription companies have shoved their drugs in our faces claiming to help reverse bph through their DHT blockers. However as more unsponsored research comes to light we are starting to hear a different tune.

Admittingly, the exact science behind all of it is both overwhelming and confusing. Drug companies pay a premium both to fund research and protect their research as the “word of law”.

At a basic level, we are starting to see that it isn’t “DHT” causing BPH but an imbalance between androgen and estrogen levels.

In fact, I read of some researchers in France actually using a DHT cream to help restore hormone balance and treat BPH with great effect.

Rather than even try to get into the exact science, which to call “muddy” would be an extreme understatement and is way out of the scope of this article…

Even with in a single research paper you may read that estrogens “may have beneficial growth-inhibiting effects or negative growth promoting effects” which in short means they may help treat or they may help cause.

Such conclusions are neither conclusive nor beneficial which I will say once again plays right into Big Pharma’s hands.

So, I’m going to leave you with some of my own conclusions here based on all the things I have read and experienced to date.

Do your best to eat clean foods with a wide variety of vegetables. Try and maintain a healthy body fat percentage.

Don’t actively try to block your DHT unless you are directed to by your trusted medical professional as you may be risking some incredibly bad side effects and hormone imbalance.

Force X7 by Alpha Wolf Nutrition is the only multi-ingredient natural T booster I recommend and works with your body to increase testosterone, lower estrogen and bring your overall hormone profile into proper balance!